Updated to reflect APA 7th edition style!
Whether you wrote your paper in AMA or APA style, you need to report your study's p values properly. In the helpful video embedded below, I explain how both APA and AMA expect you to style your p values when reporting your results.
The volume of the video below may be a bit loud: Consider lowering yours.
Need help writing your whole Results section?
Rent the complete How to Write a Results Section video!
Written for doctor of nursing practice students, the video is appropriate for anyone writing quantitative results for a journal manuscript. It's part of a complete manuscript-writing program, but the single video can be rented for just $14.99. Click the image to learn more. 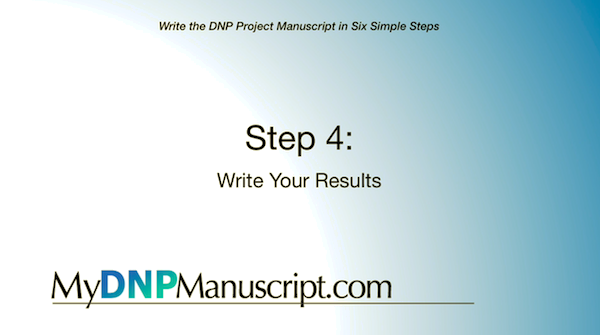 In this video you’ll learn what P values are and how to style them in both APA and AMA style.

A P value is a probability that a result was not due to the intervention whose effects you are testing. And because p values are probabilities they cant be 1.0. In other words you can never say with a 100% certainty that some outcome happened due to chance, or your null hypothesis. And because a p value can’t be 1.0 you’re not going to place a “0” to the left of the decimal point. That’s actually called a placeholder zero and you only use that zero to the left of the decimal point when you’re reporting stats that could be 1.0 or greater, like an F statistic. In addition, p values are not listed as “0.00.” Although you can get awfully close to saying that your outcome was a 100% due to your intervention, the lowest p value you’re going to see is p is less than .001.

To reiterate: APA style uses a lower case p, there is space around the math symbol, and you should report exact p values whenever possible. For AMA style, the P is capitalized, and you also space around math symbols.

Some other things to keep in mind: when you’re actually writing the phrase “p value” in text, you don’t use a hyphen. And typically when you have a P of less than .001, you don’t report the exact number. Just < .001 will do.

Finally, something you may not know that’s related to P values is that letters, when they’re used as statistical symbols, are always going to be italicized. So, that would include p, M for mean, N for number and so on. Both APA and AMA manuals cover this usage as well as complete descriptions of their usage of P values.